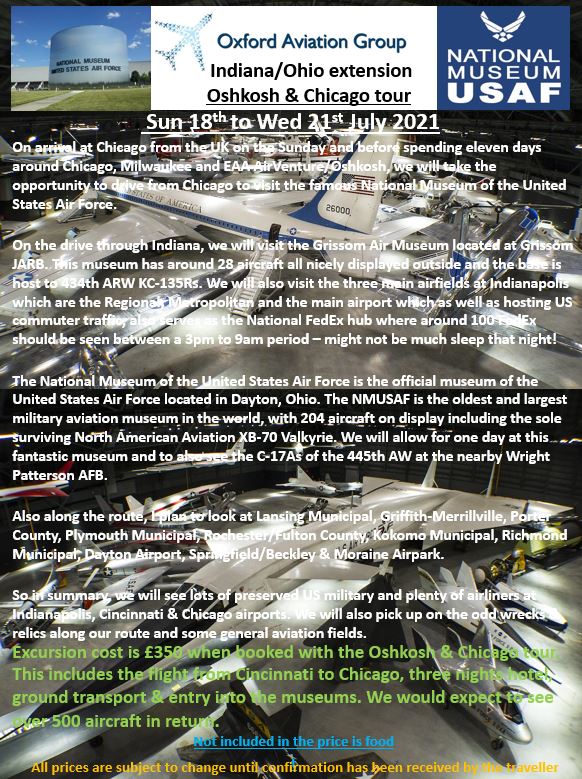 On arrival at Chicago from the UK on the Sunday and before spending eleven days around Chicago, Milwaukee and EAA AirVenture/Oshkosh, we will take the opportunity to drive from Chicago to visit the famous National Museum of the United States Air Force.

On the drive through Indiana, we will visit the Grissom Air Museum located at Grissom JARB. This museum has around 28 aircraft all nicely displayed outside and the base is host to 434th ARW KC-135Rs. We will also visit the three main airfields at Indianapolis which are the Regional, Metropolitan and the main airport which as well as hosting US commuter traffic, also serves as the National FedEx hub where around 100 FedEx should be seen between a 3pm to 9am period – might not be much sleep that night!

The National Museum of the United States Air Force is the official museum of the United States Air Force located in Dayton, Ohio. The NMUSAF is the oldest and largest military aviation museum in the world, with 204 aircraft on display including the sole surviving North American Aviation XB-70 Valkyrie. We will allow for one day at this fantastic museum and to also see the C-17As of the 445th AW at the nearby Wright Patterson AFB.

So in summary, we will see lots of preserved US military and plenty of airliners at Indianapolis, Cincinnati & Chicago airports. We will also pick up on the odd wrecks & relics along our route and some general aviation fields. All that before hitting Oshkosh! 🙂 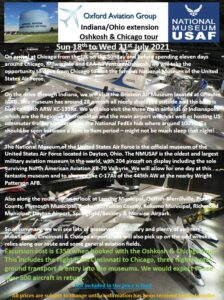